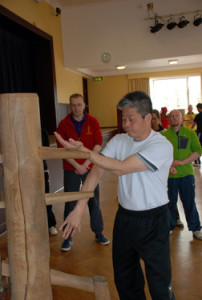 After we have learnt three attacking techniques, we need to learn a few defensive hands. The first one we must learn is Kwun Sau綑手.” Kwun綑” means “Wrap Around”, so “Kwun Sau” literally means” Wrap Around Hand”, but in this context it means” Rotating Around Hand”. In Wing Chun the Kwun Sau rotates from inside to outside, from the centre of the chest the hands come out continually. Kwun Sau is made up of a Taan Sau攤手and a Bong Sau膀手. Normally the Bong Sau is on the top and the Taan Sau is on the bottom, but in Kwun Sau the Taan Sau is on the top and the Bong Sau in on the bottom.

Most of the time your opponent will try and use Laap Sau 擸手 or Gaau Cha Sau 交叉手 to grab the top hand and trap it against the bottom hand and so we do not have any hand to attack back. However, if we use Kwun Sau we can defend against the Laap Sau and Gaau Cha Sau. As soon as our opponent grabs our top hand, we let go of their strength and turn the bottom hand into a Taan Sau, which comes out from the inside. The hand which was grabbed changes to a low Bong Sau, so this will reduce the opponent’s power. When we use Kwun Sau we must make sure we keep the correct elbow distance from the body, at least two fists. Every time they grab us we use Kwun Sau and this can dissolve all these trapping techniques.