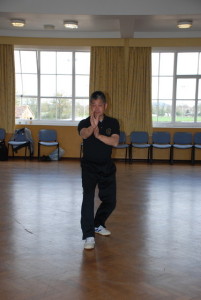 In Chi Sau, if we want to defend ourselves well, we must be able to contact with one hand. When one hand is in contact, the other hand should be a Wu Sau護手. We can use a one hand contact when we are not sure of the situation. Most of the time the contacting hand will be a long Wu Sau 長護手 and the other hand will be a close Wu Sau and both hands protect the Centre. If the opponent tries to attack by using a Paak Sau拍手against our long Wu Sau, we can quickly move the other hand out. The long Wu Sau just lets go and move back to a close Wu Sau and the other hand takes its place as a long Wu Sau. This is how the hands block the attack. We should practise rotating the long and close Wu Saus and it is a bit like punching, one after another. Once it is being attacked, the front hand drops and the other replaces it at the Centre, the dropping hand comes back up and replace the close Wu Sau at the Centre. This is a very safe technique which makes it difficult for the opponent to get in to us. We need to move to maintain the position of the long Wu Sau, which should aim towards the opponent’s face. Remember the long Wu Sau should point up towards the opponent’s nose as this is the most threatening position that makes it difficult for them to attack and also irritates them. If they do not pay attention to their own position then of course we can change the long Wu Sau into a strike. Also remember the close Wu Sau, the fingers should be level with the bottom of our Chin. This is the best position for two Wu Saus.