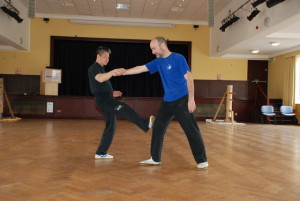 Some people when they find it hard to use their hands during Chi Sau like to kick or sweep their opponent. We should remember that Chi Sau is not fighting and is not about winning and losing. If we only want to win and hit our opponent then we will not be good in Chi Sau and our Wing Chun will not be good either. Some people might be good at fighting, but they will never reach a high level in how to fight using less energy and using their opponent’s energy against them. Wing Chun training is the way to learn how to fight using less energy and use your opponent’s energy. It is also a healthy way to train your body so you do not get injured.

During Chi Sau if we get hit we should think about how to defend ourselves using the Wing Chun way and not try to think about how to hit or kick back. It does not mean we cannot kick, we should use kicks, but only when our hands are better, and then we should let our partner know that kicking and leg attacks are involved, then it is fair training.