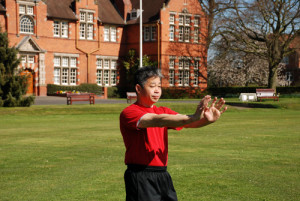 When we learn Wing Chun forms, we start with Siu Lim Tao (Siu Nihm Taum)小念頭 and then move onto the second form Tsum Kiu(Chahm Kiuh) 尋橋 and finally the third form Biu Zi 標指. We only have these three forms.

In most Chinese Kung Fu styles there can easily be over ten forms, plus many weapons forms. In traditional Chinese martial arts it is common to have 18 weapons, so it is already a lot. However most masters will concentrate on one and become very good at it, for example good with a Jian (sword) 劍 or Dao (broadsword) 刀. Some might choose the staff 棍 or spear 槍. They chose one so they can do it very well, rather than know many but not be good at any of them. Sometimes some masters are good in more than one, but they all have their own special favourite.

Bare hand forms are the skill of that style, so in Wing Chun we focus on Taan Sau攤手, Bong Sau 膀手, Fuk Sau伏手, Wu Sau護手, Laap Sau 擸手 and Paak Sau拍手 – six major techniques. Other techniques like Kwun Sau捆手, Jat Sau 窒手, Jam Sau枕手, Tok Sau托手etc. relate to those six major techniques. So we do not have many forms and this allows us to concentrate on those techniques. We therefore repeat them many times and so this makes our skill better. However, if we do not have enough forms, then we will be lacking in skills to use. So having three forms in Wing Chun is just perfect. Our Sijo Leung Jan梁贊said, “Whoever can make those three forms into one form (without losing any skill), is the best Wing Chun Man.”