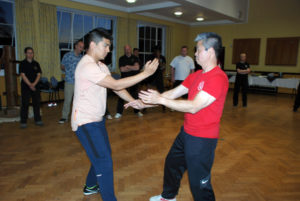 When we are in the Double Bóng  Sáu 雙膀手 position most of the time the opponent will attack first because they know that our position is bad and that our defence will be weak.  In the Period of the Three Kingdoms三國時代 a large strong army came to attack a city. The city was weak as its army was not very big. Usually in this situation they city would close up all its defences and fight the attacking army, however the Prime Minister of this city, Zhu Qe  Liang 諸葛亮 knew his army was too weak. What he did instead was to arrange for a group of elderly people to clear stand inside the city gates which were left wide open. He sat on a platform inside the gates playing music and appeared very relaxed and calm.

The large attacking army saw this and did not attack. They waited for a long time thinking that this might be a trap to lure them in. In the end they were too afraid to attack and so retreated and ran away. This is a very famous story from Chinese history and is now called the  “Empty City Strategy 空城計”. It means that sometime showing weakness is not important as there can be power behind it.