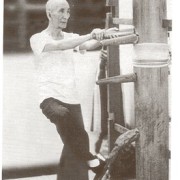 Ip Man 葉問 One Against Many – Part 5

All the gangsters had been beaten and some had even been thrown into the water. A crowd of people had gathered around to watch Grandmaster Ip Man葉問 take on this local gang. Some of them had been victims of this gang and so they were happy to see Ip Man’s Kung Fu skill, and they cheered him on and applauded him.

Suddenly Ip Man sensed danger and long pole with a sharp hook attacked him! As he had such a high level of Wing Chun skill he reacted without thinking and avoided the attack! He saw that there was a man on a boat next to the pier holding the pole. The pole used for punting the boat through the water and the hook on the end was for catching the rope to tie the boat up to the pier. Ip Man realised that there were more gang members around than he had seen! He grabbed hold of the pole and gave it a sudden twist. The man holding the other end was not expecting Ip Man to be so powerful and the sudden twist of the pole made him lose his balance and fall into the water! The whole gang was now defeated and the crowd looked at Ip Man in awe, admiration and respect. However, Ip Man knew that he should not stay here too long and so he quickly made his way back to the tea shop. He put on his long robe, picked up Ip Chun and disappeared into the crowd. This was the only time in his life that Ip Chun saw his father in a real fight.