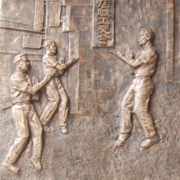 In China there are over a thousand styles of Kūng Fū功夫. China has over 5000 years of history and human beings have always fought, and whoever had the better skill or was more powerful gained the most benefit. This is part of nature. Nowadays, martial arts are different, in the past, martial arts where about life and death, so they had to be serious. Each style of Chinese Kūng Fū that has lasted such a long time, from the past up until now ought to be a serious and powerful fighting skill. Today, martial arts are more about self-training and competition. Most people who practise martial arts want to have a skill to help them defend themselves and do not necessarily want to be a champion or a top martial artist. Maybe one in a thousand would like to be the best, like Bruce Lee. Even Bruce Lee may not have thought he was the best, but people think he was. Whatever the case, he was definitely very good. Most people probably start by wanting to learn some self-defence, then later want to be good or even want to be very good, like many of today’s masters.