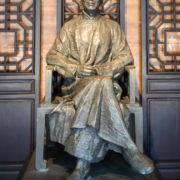 In the past, in China, if you were a well-known master, people would always come to challenge you. Usually, they would come to your school and if you did not have a school then, they would come to your home. If they were serious, they would send you a letter announcing their challenge. None of this was done for money, it was only done to test skill and improve their reputation and name. If you were well known and they defeated you, then they would become well known. It is the same as the scene in the movie Ip Man 葉問 Part 1 and in the Wòhng  Fēi Hùhng 黃飛鴻 move Once Upon a Time in China Part 1. Most of the time, the challenger would not be known by anyone, so if they lost, they would not feel so bad, but inside they would know who was better. The loser would normally leave that area and respect the winner, and maybe in a few years, they would come back to challenge the winner again.

These fights had no rules and no judge and so it was very easy for one of the opponents to be injured, disabled, or even lose an arm or leg! It was very hard to recover from these injuries and so these challenges were seen as life and death.