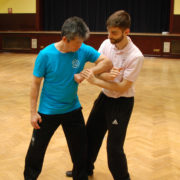 Traditionally, in the past, Bīu Zī had two more elbow techniques, Pāi Jāang 批踭 – Horizontal Elbow Strike and Gwaih Jāang 跪踭 – Kneeling Elbow. But nowadays we do not have these two elbows in Bīu Zī. My Sīfú 師父, Great Grandmaster Ip Chun 葉準, told me about this when he taught me Bīu Zī in the 80’s.  This tells us that traditional Chinese skills always have something hidden, and it was only until the Sīfú got to know the student would he or she open the skill and pass it down. However, even if some skills are lost, a clever student will discover them. Usually, whenever we learn a technique, we need to think about it in many ways. Wing Chun only has three forms, but from all the skill in these forms, we could actually have 30 forms. We do not need 30 forms; we just need to understand and develop the three forms we have.