Bad Inside and Outside Hands 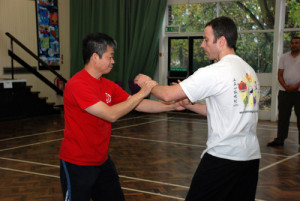 While we are changing we must keep the motion smooth and safe, then our opponent will not notice too much and we will not be hit. However, some students like to stay on the outside most of the time and every time their opponent changes to the outside Fuk Sau, they will immediately change back to the outside themselves. They do this so much that it becomes a habit and this is a bad hand. It is the same as some students always trying to maintain the inside Taan Sau and Bong Sau.  They also feel it uncomfortable when the opponent takes the inside and so they change immediately.

Any habit of keeping the inside or the outside hand most of the time means there is a weakness in our Chi Sau.  This weakness will mean that has skilled opponent will use this and hit us. We need to overcome our weaknesses during Chi Sau training and not try and hide them.