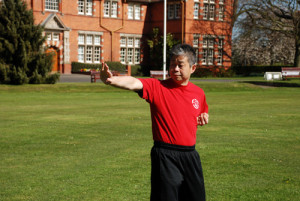 Pek is chop, which is obviously an attack. After this we do Jyun Ma轉馬, to turn back to the front and then hand changes to Jam Sau and once it stops it is Wu Sau. We do this part after whatever attack we perfom, whether it is Pek, or Chung Kuen 冲拳 or later on Mai Jarn Kuen埋㬹拳. This is because when we attack our position has changed and when we Jyun Ma to a different direction, we need to protect the Centreline 中線. Jam Sau is a block it is firm, but maintains the position, not too high and not too low, it is right at the centre of the Centreline. Also it is not too close to the body and soft otherwise it will not protect us. After the Jam Sau stops and becomes still it is a Wu Sau護手, then the other hand Muht Sau wipes the Wu Sau and the Wu Sau withdraws to the chest and becomes a fist. Muht Sau becomes a Pek. All these movements together combine to make an application. The Wu Sau turns to a Laap Sau擸手, which is of course holding the opponent’s hand and pulls them back in, and the same time we Pek to chop his throat. One pulls back and the other strikes forwards, and so it is a powerful attack. The Laap Sau pulling in and the other hand striking with a punch, or Pek is very common in Wing Chun and we can see this in other movements as well.