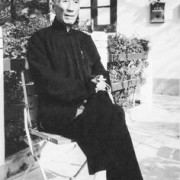 Yìhm Wing Chun 嚴詠春 left her Sīfú 師父 and returned to Tai Leung (Da Liang) Shan 大凉山. She immediately went home to see her father, Yìhm Yee 嚴二, but as she approached she could immediately see that the house was damaged, broken furniture was scattered about and the tools for their work and making tofu was broken. She realised that during the three months she had been away the gangsters had come to ruin the place. She thought of a father and hoped that he was alright! She ran into the house and went to the immediately to his room. She was relieved to find him lying in bed. He was weak, but he was very happy to see his daughter. He told Wing Chun that since she had been away the gangsters have returned regularly to destroy their shop and home. They did not hurt him, only scared him and demanded to see Wing Chun. Yìhm Yee had told them she would return in three months, and as agreed would marry the gangster’s leader if he could defeat her. However, the gangsters did not believe him and kept coming back demanding to know where she was all of the time. Whilst they were there they would scare all the customers away and also destroy their shop and home. Yìhm Yee was so worried he had become sick. Now that his daughter had returned he was very relieved but thought that they should run away and find somewhere safe to live. However, Wing Chun said, “No, I will take care of this! do not worry father.”