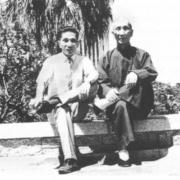 From 1957 to 1962, when Ip Man 葉問 was aged 64 to 69 years old, he moved to Lei Cheng Uk Estate, Sham Shiu Po 深水埗李鄭屋邨. This is where he lived and also taught Wing Chun from his home. The students who joined at this time were Mak Po 麥普，Yeung Hei 楊熙，Moy Yat 梅逸，Ho Kam Ming 何金銘He was also invited to teach in other places.

It was at this time his two sons Ip Chun 葉準 and Ip Ching 葉正 moved from Foshan 佛山 and joined him in Hong Kong. They lived with their father and began their Wing Chun studies once more.