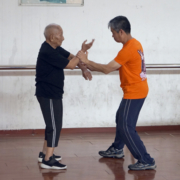 In Wing Chun there are two very famous techniques, one is Kwán Sáu 綑手 and the other is  Gāan Sáu 挌手. If you look at all the Wing Chun techniques, you will see they mostly come in pairs. Kwán Sáu and Gāan Sáu are a pair. This is because they do similar things, but one moves from inside to outside, this is Kwán Sáu, whilst the other, which is Gāan Sáu, moves from outside to inside. They are both defensive hands, however one is soft and the other is hard. Which one is hard, and which one is soft? Kwán Sáu is soft and Gāan Sáu is hard. Kwán Sáu is used when one or both hands are on contact with the opponent’s hands, and Gāan Sáu is used when there is no contact.

The basic way to use Kwán Sáu is when someone is holding on to one of your hands, imagine it is your right hand, he uses Laap Sáu 擸手 to pull it down and strikes with either a punch or palm. Now we bring our left hand, which will normally be in a Wuh Sáu 護手, forwards towards the opponent’s centre and this changes into Tāan Sáu 攤手. The Tāan Sáu blocks the opponent’s attack. The opponent then continues to attack by letting go of our right hand, uses Laap Sáu pull down our left Tāan Sau and attacks again. Our left hand, which has been grabbed, drops down and our hands cycle round, from inside to outside, and we make a new Tāan Sáu with our right hand to block the next attack. If the opponent pulls our hand down again, we can repeat the cycle. The Tāan Sáu always comes from out from the Centre and the hand which is grabbed lets go and become a Bóng Sáu 膀手.