Seung Chi Sau 雙黐手– Changing from Inside to Outside 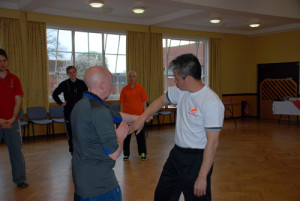 There are many people who know how to do Chi Sau 黐手 and although they know how to roll the hands up and down a lot of them do not get the hand positions right. Also I have not seen anyone, with previous Chi Sau experience, who has come to my class, know how to change inside and outside properly. It seems this skill is becoming lost and so we must get this knowledge back and get it right.

Whilst your Taan Sau is still in contact with the opponent’s lower Fuk Sau 伏手, and he is expecting you to roll normally back up to Bong Sau, you rotate your wrist outwards around his wrist. While you do this you must keep in contact with this Fuk Sau and continue to move upwards. Your opponent should automatically change his Fuk Sau to a Bong Sau. So now you have an upper Fuk Sau and he has a Bong Sau, both hands are now in the upper position.