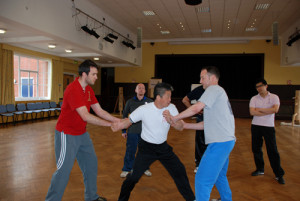 In the 1950’s, in Hong Kong, students of different styles of Kung Fu and martial arts would meet on the flat roof tops of buildings (the buildings could be 10 stories high) to compete against each other. Many different styles were involved, Hung Kuan(Hung Ga)洪拳, Wing Chun 詠春，Choi Lee Fut 蔡李佛，Bagua Jeung 八卦拳，Shaolin Kuan 少林拳 and many other styles of Chinese Kung Fu and even Taekwondo, Karate etc. This activity went on through the 60’s 70’s and even in to the early 80’s. People called this competition “Gong Sau”. Gong means talking. Please do not get this confused with Gong as in Qigong, the Chinese character is different and this is also the Cantonese pronunciation. “Sau” means “Hand”, so “Gong Sau” meant “Talking with the Hands”. Those Kung Fu completion was all private and not open to the public.

The most active Wing Chun person in Gong Sau was Wong Shun Leung黃淳樑(8 May 1935 – 28 January 1997) and he competed with many different people from different styles. Because he won so many fights, he was given the nickname “Gong Sau Wohng講手王”. “Wohng王” means” King”, so they called him the King of Fighting. Sometime Bruce Lee would join the competition, because he is Wong Shun Leung’s Wing Chun brother. Now this sort of thing is illegal and has stopped, and this was before Mixed Martial Arts Competition. In Hong Kong past it was Gong Sau and this was how Wing Chun became popular.