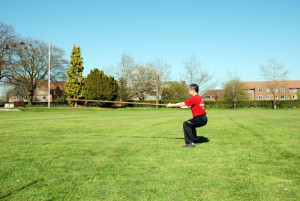 In terms of when we can learn it, anyone can learn it and there is no need to wait for the end of the Wing Chun syllabus and finished all the bare hand forms. However, my suggestion is to wait until we have become good at Siu Lim Tao 小念頭. When we are leaning Wing Chun we need to learn the correct attitude and principles of the skill and so we need to learn how to use less strength and energy. Learning the Luk Dim Bun Gwan first may make us forget this as the training requires a lot of strength.