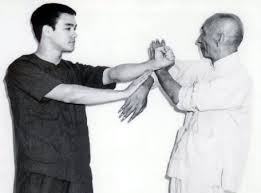 That afternoon, after school, Fung told Ip Man about his uncle and how he was also from Foshan and knew Kung Fu.

Fung’s uncle smiled and said, “Shall we practise Chi Sau together? I also know some Wing Chun as well.” Ip Man had no fear. He was one the “Three Heroes” and he wanted to experience other people’s Chi Sau as well.

Fung’s uncle stood up and held out his arms to roll with Ip Man. Ip Man suddenly did not feel right and began to feel afraid.