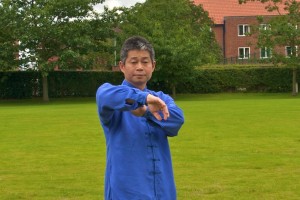 To be good at Bong Sau is not easy as it is one of the most difficult hands to do.  When you use a single handed Bong Sau the body must turn 45 degrees. If we have contact with both hands, like in double hand Chi Sau, then we can face the opponent square on.

Bong Sau diverts the opponent’s energy when it is coming towards us.  Once it has been diverted we can use the Wu Sau to grab the attacking hand with the Bong Sau changing to a chop. Bong Sau can also change to Taan Sau and then a strike.  There are so many ways to use Bong Sau in Wing Chun.  When our footwork is very good, we can use Cheong Bong Sau which means Long Bong Sau.  With this Bong Sau we do not need to use Wu Sau.  If you can do this well, then it means your Bong Sau skill is very high and your sensitivity and footwork are also very good.