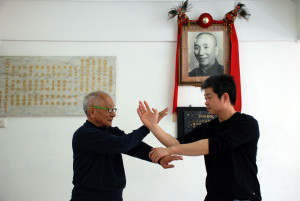 After a few years Ip Man graduated from St Stephen’s College and returned to his family in Foshan.

He went to visit his Sihing, Ng Chun So, who had taught him most of the Wing Chun skill before he went to Hong Kong. Ip Man told him about meeting Uncle Leung Bik and told him how good Leung Bik’s skill was, of course, everyone wanted to see how good Ip Man was now and they realised how much better he was now. His skill was much higher and he used less energy than they did.

When Ip Man went to find Uncle Leung Bik, he was nowhere to be found. Although Ip Man was upset, he carried on Leung Bik’s Wing Chun and in the end reached a very high level.

There were many times he had to use his skill to defend himself and he even accepted certain challenges. Ip Man always won, but he also never really hurt his opponent. This was good Kung Fu morals.

Due to the chaotic situation in China, in 1949 Ip Man decided to move back to Hong Kong. In 1950 after being introduced to the Kowloon Restaurant Workers Union, he started teaching Wing Chun for a living. This was not what he had planned to do, he just loved Wing Chun very much. But because he had to teach openly for a living he finally reached a very high level and has become one of the most famous Masters in the world. Today, even his eldest son, Ip Chun葉準, does the same, he teaches Wing Chun for a living even though he had not planned to. In the end he chose to become a Wing Chun teacher and more he is one of the greatest teachers and masters in the world. I was lucky to start studying with him in the early 80’s in Hong Kong and that has changed my life.