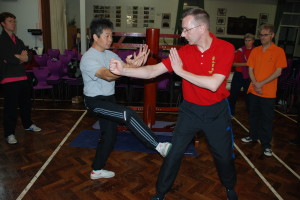 Taan means open, Sau means hand, so in English Taan Sau means, “Opening Hand”.  When we open something like a book or newspaper we open it either side from the centre. So Taan Sau opens from inside, from the centre of our body to the outside of the body.

Taan Sau can be used to block the opponent’s attack or to just make contact with their hand and wait for the situation to change then we can change to another hand, for example Laap Sau 擸手, or even hit directly with a punch or palm strike.  We can even hit with the other hand the same time as we block with the Taan Sau.