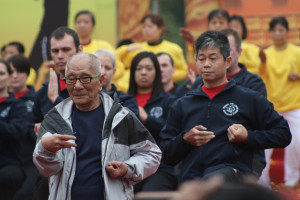 The position of Fuk Sau we should have the elbow in and two fists widths away from the body. Fore arm is horizontal level and the palms slightly higher than the forearm. The wrist should be bent so the palms are facing inwards and the fingers should be relaxed. The knuckles should be at the centre of the chest. We contact the opponent at the small finger side of the wrist, the energy should be in the elbow and the palms and fingers should maintain relaxed.

Fuk Sau is an outside hand and rests on the opponent’s hand, if the opponent should attack forwards, then it can change to a Huen Sau 圈手 and hit back with a lower palm, or we can use Jam Sau枕手 and then punch forwards. We can also change to “hard” Fuk Sau, which is a bit like Laap Sau擸手, and then we can use Gaau Chaa Sau交叉手 (Crossing Hands) to trap him.

So Fuk Sau is a passive hand which we use to read our opponent’s energy. Then we can deside whether we attack or defend.