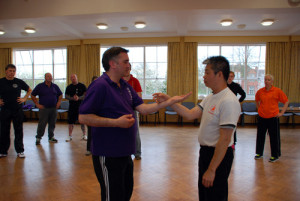 We begin with Hoi Ma 開馬. Hoi開means open and ma means stance. Hoi is different to Taan 攤 like in Taan Sau攤手. Hoi is opening anything, whereas Taan is opening from inside out and laying it flat. Once we open the stance we do not move the body, only the hand can move and we should pay particular attention to keeping the shoulders, waist and head still and in the correct position.

Daan Chi Sau is used for practising Taan Sau, Bong Sau, Fuk Sau and Jam Sau techniques properly, but not only this we learn how to respond with sensitivity and timing with an opponent. You take it in turns as on partner attacks and the other defends and so you are able to repeat the techniques and train together.