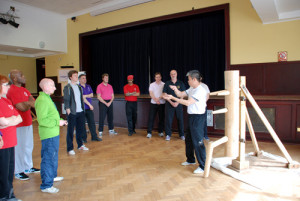 After we have done solo Seung Chi Sau covering all four situations, we then need to pair up with a partner and go through these four situations once more. Before we do this we need to know that when we are performing Taan Sau 攤手 and Bong Sau 膀手 our hands are on the inside which is called Noih Muhn Sau 內門手, or indoor hands. When we are performing Upper and Lower Fuk Sau our hands are on the outside and this is called Ngoih Muhn Sau 外門手 or outdoor hands.

Inside hand means our hand is inside our opponent’s hands, which means it is closer to the centre of the body. In most cases it also means we are closer the opponent’s centre as well, particularly when we have both hands in contact, and it is easier to hit the opponent’s centre. With our Taan Sau we contact out opponent with the thumb side of the forearm and with our Bong Sau we contact with the small finger side of the forearm.

With outside hands, the position is just the opposite. Our opponent’s hands are closer to the centre of our body and our hands are outside of their hands. In this position, we will usually contact with Fuk Sau, maintaining contact with the small finger of our hand on the side of our opponent’s forearm. In this way, we are prepared if our opponent attacks.

It can be dangerous to attack from the outside first and generally inside hands are safer will allow us to attack more easily. Therefore when on the outside it is best to keep the correct distance from the opponent and wait for them to try and attack, then you can use their energy and strike back.