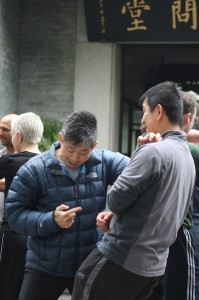 Once we can Gwo Sau過手, which means we can do anything and move in any direction, we need to try and use Wing Chun techniques to attack and defend. When we want to attack our opponent, there are three techniques we need to learn. The first is an attacking technique from the outside hand, called Gaau Cha Sau 交叉手 and it is one of the most common techniques. Gaau 交, means cross over. Cha 叉 is a fork or a weapon that is used in war. Cha in verb also means we hold the target and then stab it. It is the same when we use a fork, we hold the food on the plate with the fork and then we can use a knife to cut it.

All together then, Gaau Cha Sau means Cross Over and Hold on Hand. This is a very common and important technique which we use all the time. When rolling hands and our hands are on the outside in Fuk Sau, we grab hold of the opponent’s hands, cross them over and push their hands close into their body. But we should not use a lot of force, instead we should step forwards so we are closer to them. In this way he will not be able to move easily. Then we can pull out our bottom hand and punch him. Remember to make sure his hands are pinned against his body so he cannot move. Only then can you let go the bottom hand to you can strike him. It must be done in this order.