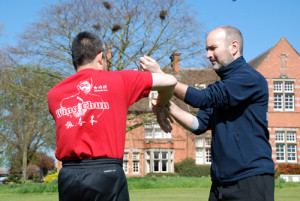 When we are doing Chi Sau we need to be able to attack whether our hands are outside or inside. When the hands are on the inside we can use our second basic attacking hand – Paak Sau 拍手. Being inside means we have one Taan Sau 攤手 and one Bong Sau 膀手, we use the inside Paak Sau when we are rolling and have almost changed to a Bong Sau, so we can do this from either hand.

As we change from Taan Sau and are coming up the Bong Sau, we slap our opponents Fuk Sau 伏手, on his forearm. As their hand is slapped out of position, our other hand changes from Taan Sau and strikes forwards as a Waanhg Jeung 横掌, hitting the opponent’s jaw. As we hit we must also step forwards, which foot we step forwards with depends on which hand we are hitting with and this should be the same side. This moves us closer to the opponent’s face and so it means our strike will have more power.

Meanwhile, as we Paak Sau, we need to lift our elbow to block the opponent’s other hand. All the movements must be done at the same time: Paak Sau, elbow up, step forwards and hit. This is a very effective and powerful technique, which we must all know.