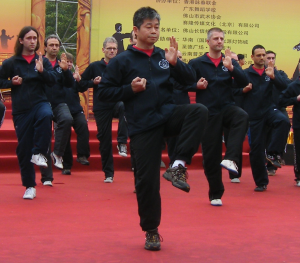 When we practise Siu Lim Tao 小念頭, during the first section we do not move a lot. This is important training as if we want to move quickly and accurately we must first train slowly. The first section is the part of the form that contains the very slow movements. On each side we are train 1 Taan Sau攤手, 3 Fuk Sau伏手 and 4 Wu Sau護手 and we do these so slowly that we almost cannot see ourselves moving. When we come to the proper position for the Taan Sau we should hold that position for a little longer so that we get used to it. Then when we need to use a Taan Sau we can make the correct position. The same is way training for Fuk Sau and Wu Sau.

With Wu Sau we change from a long Wu Sau to a close Wu Sau and we should hold those position for a little bit longer as well. The transitions moving to Taan Sau and Fuk Sau are not proper positions, so we do not need to hold them. In the Taan Sau and Fuk Sau, however we do need to hold as these are our best friends in a fight. In the long Wu Sau 長護手, the arm is almost straight, but it must not be completely straight, this position we need to hold a bit longer. The close Wu Sau is one of the most important positions. We cannot let it get too close to our body as this will result in us being hit. It should be around 2 fists widths from the chest to the thumb edge of the wrist.

Practise Siu Lim Tao slowly and hold the correct positions longer. This will be good for your Wing Chun skill particular for Gung Lihk 功力.